The Annual Report to the Nation on the Status of Cancer has statistics on cancer deaths and new cases (incidence).

The report includes long-term trends (since 2001) and short-term trends with the most recent five years of data (2014-2018 for incidence and 2015-2019 for mortality). The Annual Report also provides rates and trends for the most common cancers among children aged 0-14 and adolescents and young adults (AYAs) aged 15-39.

Scroll down to learn more about trends in cancer incidence and mortality rates.

Downward trends in mortality (cancer death rates) are the gold standard for evidence of progress against cancer. 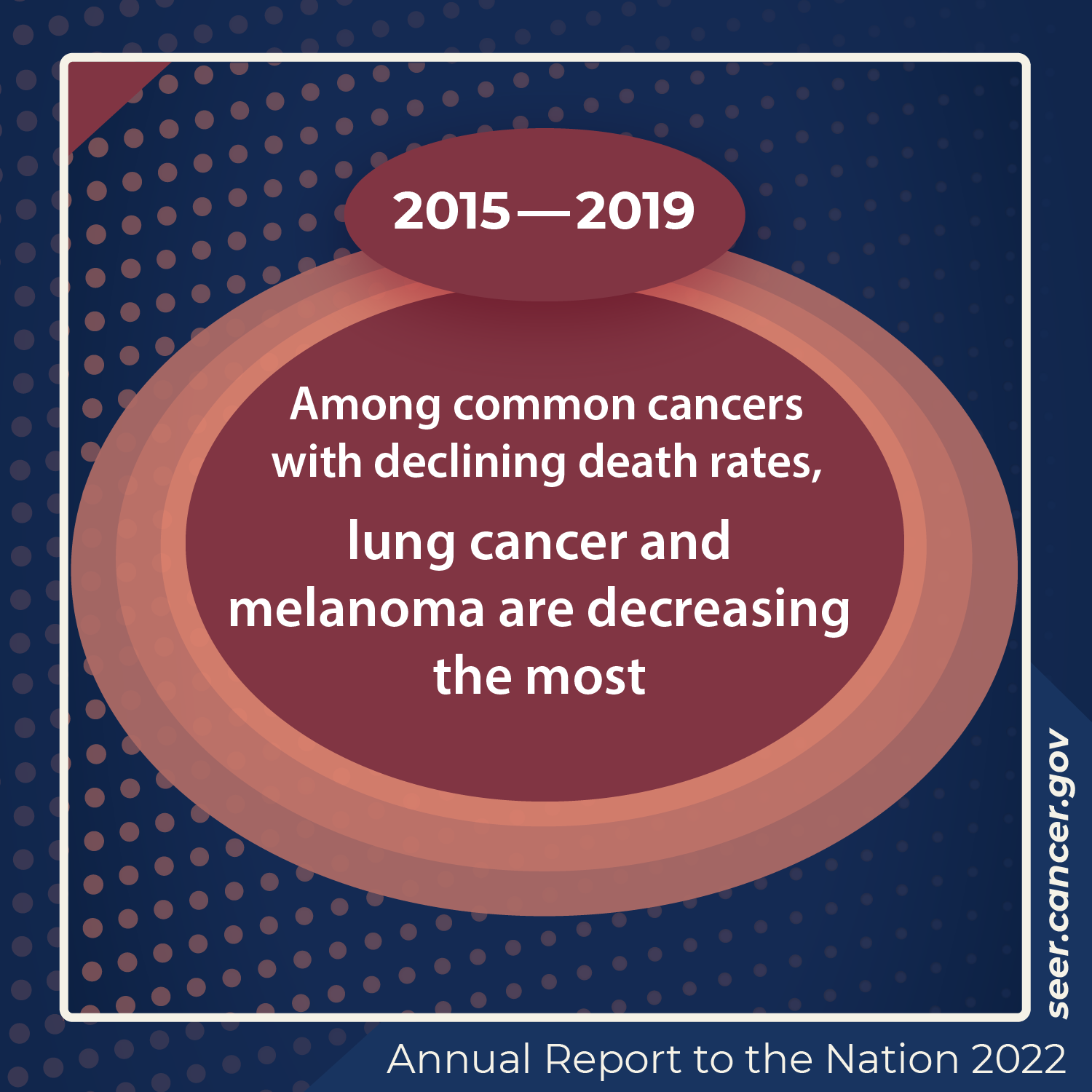 Between 2015-2019, 11 of the 19 most common cancers in men showed decreases in mortality: lung and bronchus, melanoma, kidney and renal pelvis, stomach, larynx, leukemia, colon and rectum, non-Hodgkin lymphoma, urinary bladder, esophagus, and myeloma.

Like the trends seen for male mortality, female mortality rates for melanoma and lung cancer continued their sharp decrease. Uterine and pancreatic cancers showed increases in mortality for women. 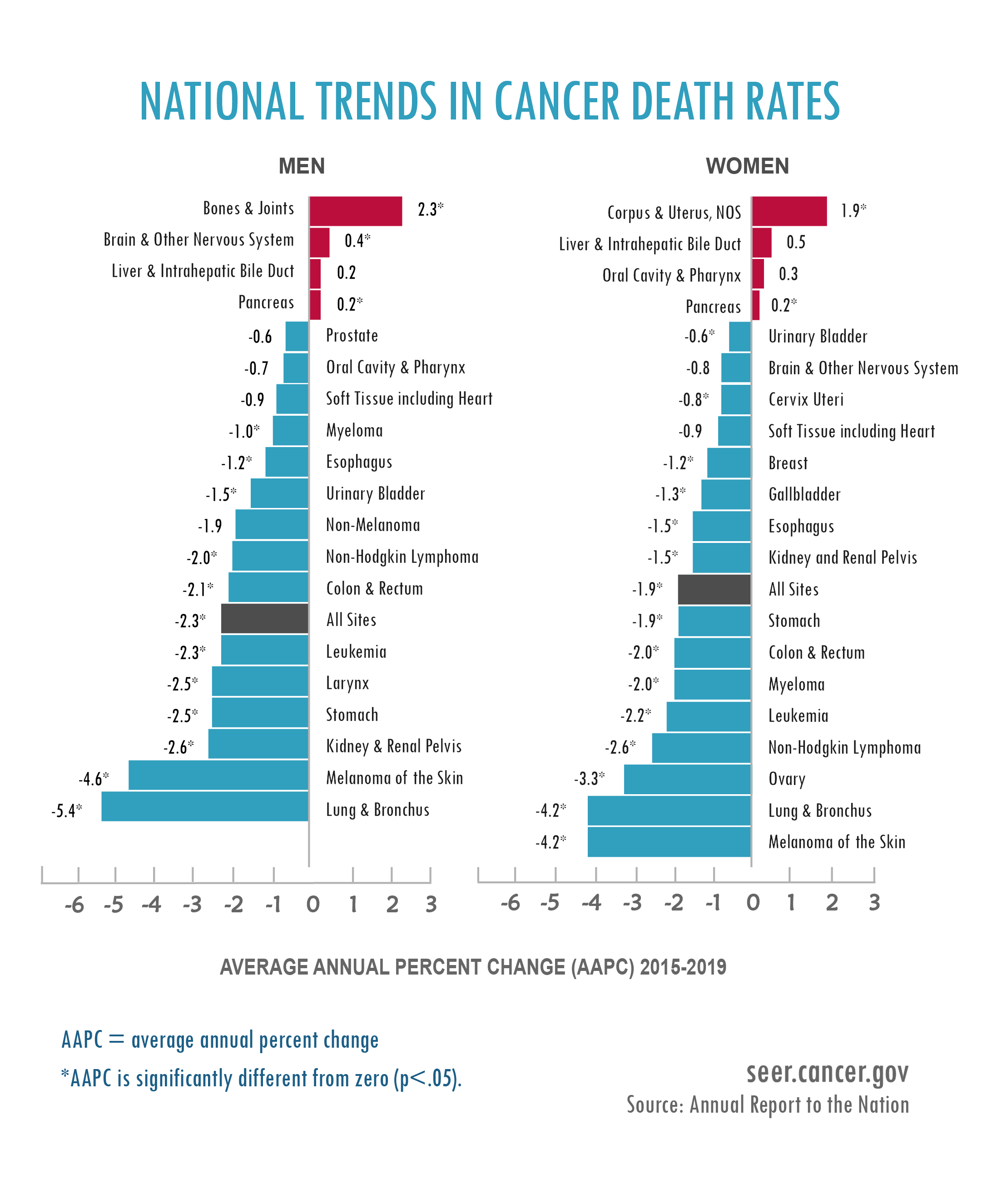 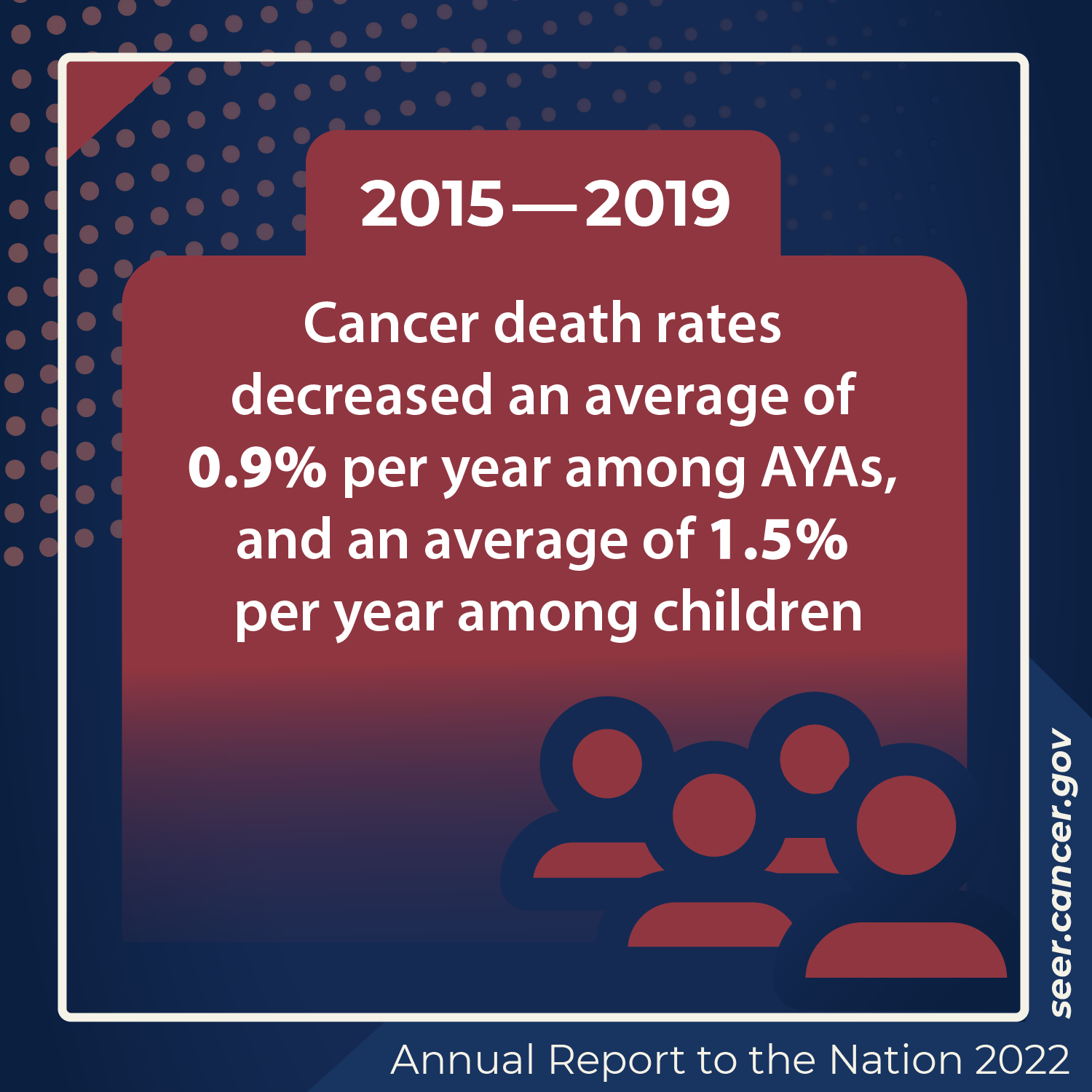 Between 2014-2018, rates of new cancer cases were stable for men and increased slightly—0.2% per year, on average—for women.

However, incidence rates increased for 3 cancers: pancreas, kidney and renal pelvis, and testis.

However, incidence rates increased for 7 of the 18 most common cancers: melanoma, liver and intrahepatic bile duct, myeloma, kidney and renal pelvis, pancreas, breast, and oral cavity and pharynx. 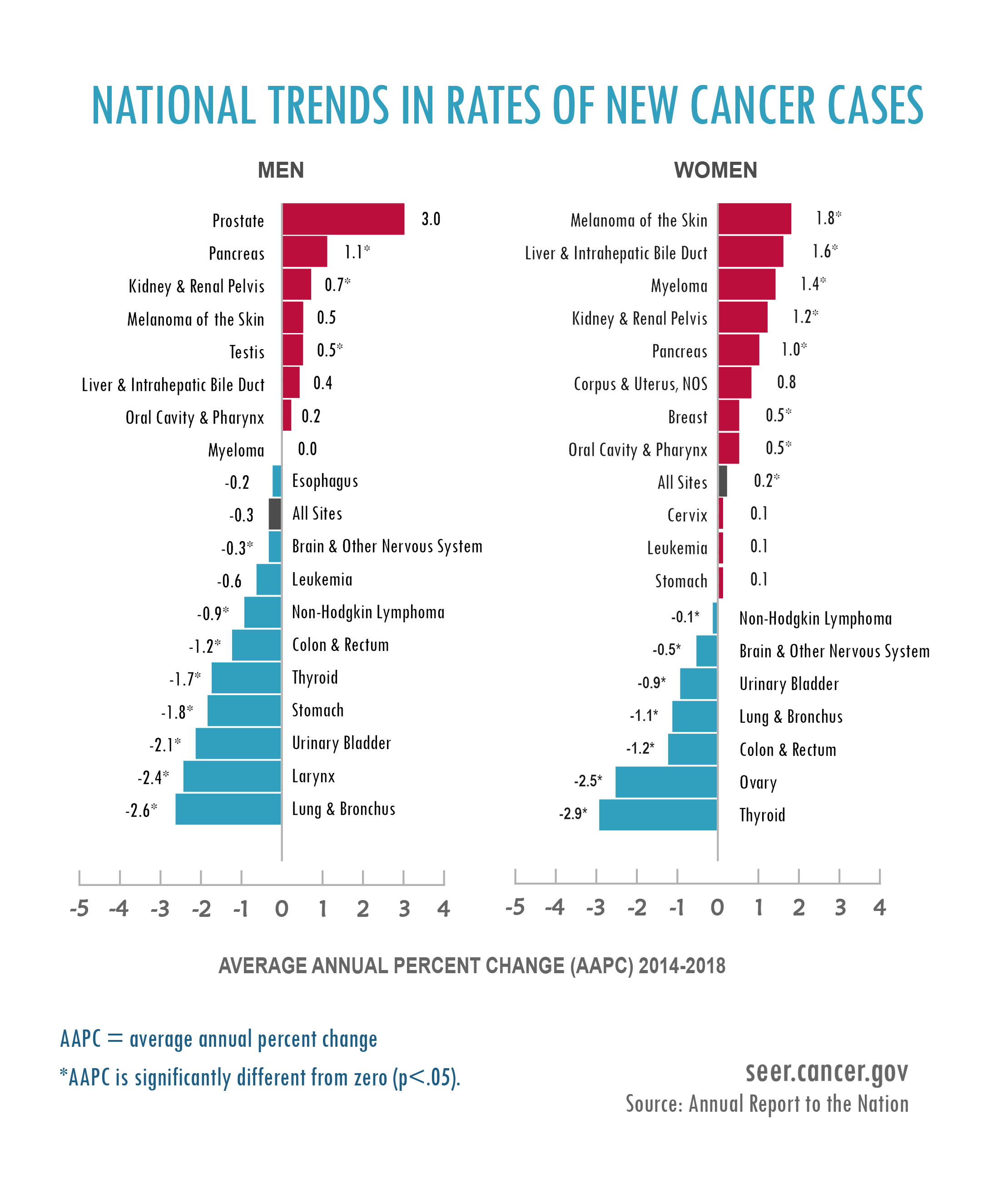 Overall cancer incidence rates for AYAs aged 15-39 increased an average of 0.9% per year between 2014 and 2018, and incidence rates were stable (neither increased nor decreased) for children aged 0-14 during that period.

The most common cancer types among children included leukemia, brain and other nervous system, and lymphoma, with cases increasing by 0.7% - 0.9% per year on average for all three during 2001-2018.

Lung Cancer Mortality Continues to Drop; Progress Slows for Several Cancers Due to Obesity and Other Risk Factors

Rates of new cases and deaths for lung cancer continue to decrease, reflecting the drop in smoking rates in the United States. The mortality rate decreased over twice as fast as the incidence rate due to new treatments and greater access to screening and care.

The mortality rate for melanoma stabilized for men and decreased for women following the introduction of new treatments. Rates of new melanoma cases in AYAs continue to decline.

Incidence rates for pancreatic cancer increased since 2001 and, while the disease accounts for 3% of new diagnoses, it is the 4th leading cause of cancer death for men and women in the United States. Along with rising obesity rates, improved detection and diagnostic techniques may partly explain the increase in new pancreatic cancer cases. New therapies slightly improved the 5-year survival rate for certain subtypes of pancreatic cancer.

Rates of new cases of thyroid cancer in AYAs decreased for the first time after a long period of increase.

Deaths from oral cavity and pharynx cancers increased among White men and women but not among other racial and ethnic groups. These diseases have multiple risk factors, such as alcohol use, tobacco use, and human papillomavirus (HPV) infection, with studies suggesting that HPV infection is primarily responsible for the rising rates of new diagnoses of the HPV-associated types.

Rising rates of obesity, diabetes, and physical inactivity may explain the upward trends of new pancreatic, female breast, and colorectal cancer cases, as well as the stalled progress of myeloma, uterine, and kidney cancers.

Progress against breast cancer decelerated, as rates of new cases continued to increase by 0.5% each year and the decline in death rate slowed down after a period of steeper decline. Obesity, alcohol consumption, and older age at first birth may be responsible for the increasing incidence.

Cancer health disparities persist. The breast cancer death rate for Black women is 40% higher than the rate for White women. Systemic racism, socioeconomic status, and unequal access to healthcare and housing, as well as higher rates of aggressive breast cancer subtypes for Black women, are likely major factors responsible for this discrepancy.

Rates of new cases of uterine cancer increased by more than 2% per year for every racial and ethnic group except Whites, which saw their rate of new cases stabilize from 2014-2018. Uterine cancer deaths are twice as high in Black women compared to White women, despite similar incidence rates. Black women also have worse survival across all stages and subtypes.