Lifetime Risk of Developing Cancer: Approximately 12.6 percent of men will be diagnosed with prostate cancer at some point during their lifetime, based on 2017–2019 data.

Prevalence of This Cancer: In 2019, there were an estimated 3,253,416 men living with prostate cancer in the United States.

How Many People Survive 5 Years Or More after Being Diagnosed with Prostate Cancer?

Cancer stage at diagnosis, which refers to extent of a cancer in the body, determines treatment options and has a strong influence on the length of survival. In general, if the cancer is found only in the part of the body where it started it is localized (sometimes referred to as stage 1). If it has spread to a different part of the body, the stage is regional or distant. For prostate cancer, 72.8% are diagnosed at the local stage. The 5-year relative survival for localized prostate cancer is 100.0%.

Compared to other cancers, prostate cancer is fairly common.

Prostate cancer represents 14.0% of all new cancer cases in the U.S.

Prostate cancer occurs only in men, and it is more common in older men than younger men. It is more likely to occur in men with a family history of prostate cancer and men of African American descent. The rate of new cases of prostate cancer was 112.7 per 100,000 men per year based on 2015–2019 cases, age-adjusted.

Rate of New Cases per 100,000 Persons by Race/Ethnicity: Prostate Cancer

Prostate cancer is most frequently diagnosed among men aged 65–74.

Because we have screening for prostate cancer, most of the time it is caught before it spreads to other parts of the body. Men who have prostate cancer that is characterized as localized or regional are not as likely to die as men whose cancer is distant. In general prostate cancer has excellent survival rates, but death rates are higher in African American men, men who have advanced stage cancer, and men who are between the ages of 75 and 84. Prostate cancer is the fifth leading cause of cancer death in the United States. The death rate was 18.8 per 100,000 men per year based on 2016–2020, age-adjusted.

The percent of prostate cancer deaths is highest among men aged 75–84.

Using statistical models for analysis, age-adjusted rates for new prostate cancer cases have not changed significantly over 2010–2019. Age-adjusted death rates have been falling on average 1.2% each year over 2011–2020. 5-year relative survival trends are shown below.

Cancer and the Prostate

Figure: Prostate and Nearby Organs 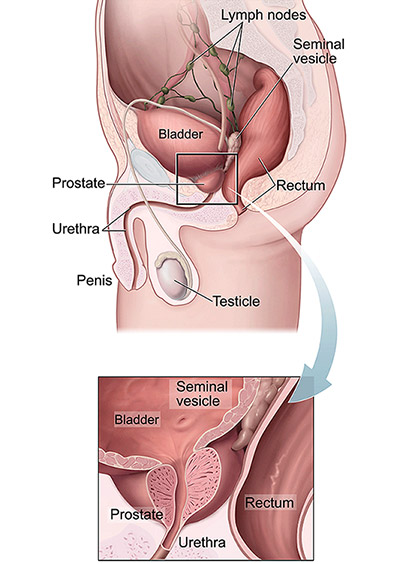 This cancer forms in tissues of the prostate (a gland in the male reproductive system found below the bladder and in front of the rectum). The prostate surrounds the urethra, the tube through which urine flows. A healthy prostate is about the size of a walnut. If the prostate grows too large, it squeezes the urethra. This may slow or stop the normal flow of urine. Prostate cancer usually occurs in older men.

Here are some resources for learning more about prostate cancer.