Lifetime Risk of Developing Cancer: Approximately 0.3 percent of men and women will be diagnosed with laryngeal cancer at some point during their lifetime, based on 2017–2019 data.

Prevalence of This Cancer: In 2019, there were an estimated 90,176 people living with laryngeal cancer in the United States.

How Many People Survive 5 Years Or More after Being Diagnosed with Laryngeal Cancer?

Cancer stage at diagnosis, which refers to extent of a cancer in the body, determines treatment options and has a strong influence on the length of survival. In general, if the cancer is found only in the part of the body where it started it is localized (sometimes referred to as stage 1). If it has spread to a different part of the body, the stage is regional or distant. The earlier laryngeal cancer is caught, the better chance a person has of surviving five years after being diagnosed. For laryngeal cancer, 52.0% are diagnosed at the local stage. The 5-year relative survival for localized laryngeal cancer is 78.3%.

Compared to other cancers, laryngeal cancer is rare.

Laryngeal cancer represents 0.7% of all new cancer cases in the U.S.

Laryngeal cancer becomes more common with age and is more common in men than in women. Smoking is a major risk factor for this cancer, and reduction smoking rates in recent years has led to a downturn in both incidence and mortality. The rate of new cases of laryngeal cancer was 2.8 per 100,000 men and women per year based on 2015–2019 cases, age-adjusted.

Laryngeal cancer is most frequently diagnosed among people aged 55–64.

The percent of laryngeal cancer deaths is highest among people aged 65–74.

Cancer and the Larynx 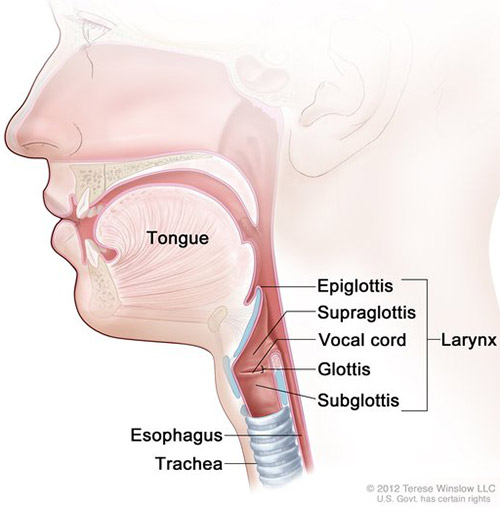 Figure: Anatomy of the larynx; drawing shows the epiglottis, supraglottis, glottis, subglottis, and vocal cords. Also shown are the tongue, trachea, and esophagus.

Laryngeal cancer is a type of head and neck cancer.

The larynx is a part of the throat, between the base of the tongue and the trachea. The larynx contains the vocal cords, which vibrate and make sound when air is directed against them.

Here are some resources for learning more about laryngeal cancer.