Lifetime Risk of Developing Cancer: Approximately 2.1 percent of men and women will be diagnosed with melanoma of the skin at some point during their lifetime, based on 2017–2019 data.

Prevalence of This Cancer: In 2019, there were an estimated 1,361,282 people living with melanoma of the skin in the United States.

How Many People Survive 5 Years Or More after Being Diagnosed with Melanoma of the Skin?

Cancer stage at diagnosis, which refers to extent of a cancer in the body, determines treatment options and has a strong influence on the length of survival. In general, if the cancer is found only in the part of the body where it started it is localized (sometimes referred to as stage 1). If it has spread to a different part of the body, the stage is regional or distant. The earlier melanoma of the skin is caught, the better chance a person has of surviving five years after being diagnosed. For melanoma of the skin, 81.6% are diagnosed at the local stage. The 5-year relative survival for localized melanoma of the skin is 99.5%.

Compared to other cancers, melanoma of the skin is fairly common.

Melanoma of the skin represents 5.2% of all new cancer cases in the U.S.

Melanoma is more common in men than women and among individuals of fair complexion and those who have been exposed to natural or artificial sunlight (such as tanning beds) over long periods of time. There are more new cases among whites than any other racial/ethnic group. The rate of new cases of melanoma of the skin was 21.5 per 100,000 men and women per year based on 2015–2019 cases, age-adjusted.

Rate of New Cases per 100,000 Persons by Race/Ethnicity & Sex: Melanoma of the Skin

Percent of New Cases by Age Group: Melanoma of the Skin

Melanoma of the skin is most frequently diagnosed among people aged 65–74.

Death Rate per 100,000 Persons by Race/Ethnicity & Sex: Melanoma of the Skin

Percent of Deaths by Age Group: Melanoma of the Skin

The percent of melanoma of the skin deaths is highest among people aged 65–74. 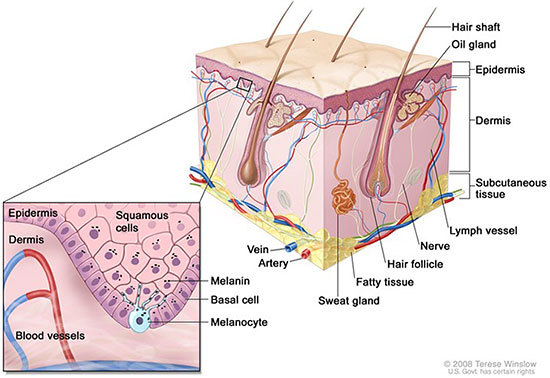 Figure: Anatomy of the skin, showing the epidermis, dermis, and subcutaneous tissue. Melanocytes are in the layer of basal cells at the deepest part of the epidermis.

Skin cancer can occur anywhere on the body, but it is most common in skin that is often exposed to sunlight, such as the face, neck, hands, and arms. There are different types of cancer that start in the skin.

Melanoma is a disease in which malignant (cancer) cells form in the skin cells called melanocytes (cells that color the skin). Melanocytes are found throughout the lower part of the epidermis. They make melanin, the pigment that gives skin its natural color.

Here are some resources for learning more about melanoma of the skin.