Lifetime Risk of Developing Cancer: Approximately 1.2 percent of men and women will be diagnosed with thyroid cancer at some point during their lifetime, based on 2017–2019 data.

Prevalence of This Cancer: In 2019, there were an estimated 915,664 people living with thyroid cancer in the United States.

How Many People Survive 5 Years Or More after Being Diagnosed with Thyroid Cancer?

Cancer stage at diagnosis, which refers to extent of a cancer in the body, determines treatment options and has a strong influence on the length of survival. In general, if the cancer is found only in the part of the body where it started it is localized (sometimes referred to as stage 1). If it has spread to a different part of the body, the stage is regional or distant. The earlier thyroid cancer is caught, the better chance a person has of surviving five years after being diagnosed. For thyroid cancer, 65.4% are diagnosed at the local stage. The 5-year relative survival for localized thyroid cancer is 99.9%.

Compared to other cancers, thyroid cancer is relatively rare.

Thyroid cancer represents 2.3% of all new cancer cases in the U.S.

Thyroid cancer is more common in women than men and among those with a family history of thyroid disease. The rate of new cases of thyroid cancer was 14.6 per 100,000 men and women per year based on 2015–2019 cases, age-adjusted.

Thyroid cancer is most frequently diagnosed among people aged 45–54.

The percent of thyroid cancer deaths is highest among people aged 75–84.

Using statistical models for analysis, age-adjusted rates for new thyroid cancer cases have not changed significantly over 2010–2019. Age-adjusted death rates have been stable over 2011–2020. 5-year relative survival trends are shown below.

Cancer and the Thyroid 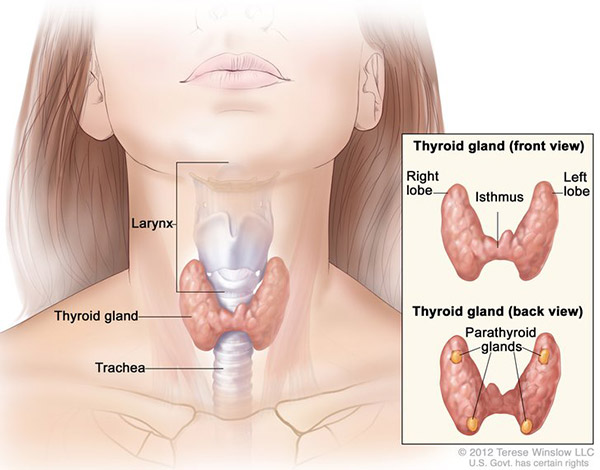 This cancer forms in the thyroid gland, an organ at the base of the throat that makes hormones that help control heart rate, blood pressure, body temperature, and weight.

Four main types of thyroid cancer are papillary, follicular, medullary, and anaplastic thyroid cancer. The four types are based on how the cancer cells look under a microscope.

Here are some resources for learning more about thyroid cancer.