Lifetime Risk of Developing Cancer: Approximately 2.3 percent of men and women will be diagnosed with bladder cancer at some point during their lifetime, based on 2017–2019 data.

Prevalence of This Cancer: In 2019, there were an estimated 712,644 people living with bladder cancer in the United States.

How Many People Survive 5 Years Or More after Being Diagnosed with Bladder Cancer?

Cancer stage at diagnosis, which refers to extent of a cancer in the body, determines treatment options and has a strong influence on the length of survival. In general, if the cancer is found only in the part of the body where it started it is localized (sometimes referred to as stage 1). If it has spread to a different part of the body, the stage is regional or distant. The earlier bladder cancer is caught, the better chance a person has of surviving five years after being diagnosed. For bladder cancer, 33.6% are diagnosed at the local stage. The 5-year relative survival for localized bladder cancer is 69.6%.

Compared to other cancers, bladder cancer is fairly common.

Bladder cancer represents 4.2% of all new cancer cases in the U.S.

Bladder cancer is most frequently diagnosed among people aged 65–74.

Bladder cancer is the tenth leading cause of cancer death in the United States. The death rate was 4.2 per 100,000 men and women per year based on 2016–2020 deaths, age-adjusted.

The percent of bladder cancer deaths is highest among people aged 85+.

Cancer and the Bladder 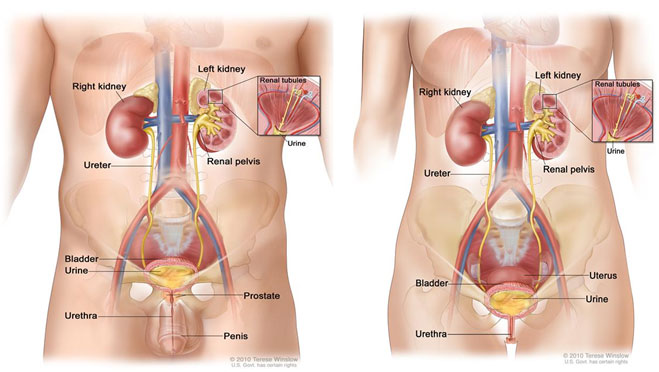 The bladder is a hollow organ in the lower part of the abdomen. It is shaped like a small balloon and has a muscular wall that allows it to get larger or smaller. The urine passes from the two kidneys into the bladder through two tubes called ureters. The bladder is emptied through another tube called the urethra.

There are three types of bladder cancer that begin in cells in the lining of the bladder: transitional cell carcinoma:; squamous cell carcinoma; and adenocarcinoma.

Here are some resources for learning more about bladder cancer.